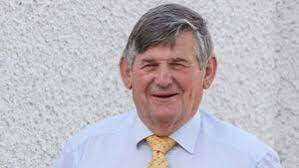 Download our mobile app to hear more about Moyne/Templetuohy GAA.

Congratulations to our own Seán Fogarty who has been awarded the Laochra Gael award for 2022-a prestigious award that acknowledges great service made by persons within the GAA.

Seán Fogarty was very much involved in Moyne Templetuohy GAA from an early age. Following his playing career,which was ended at 17 years of age due to a very bad hand injury, he became secretary of the club in 1973 and continued in this role while also being elected onto the County Board executive in 1975. It was not automatic that each club would have an automatic county delegate in the 1970’s and only 4 members of each division could be elected to be a delegate. Seán was elected each year to this position for the next 5 years. After each meeting, Sean recalls that he would have to come back to the Mid board to update all on the happenings at County Board Level.

Seán continued as delegate on the Co. Board until 1988 when he became vice-chairman of the Mid Board. He was subsequently elected chairman of this board in 1991, a position he held for 3 years.

All the provisional chairpersons are Vice presidents of the GAA and as Seán was the most senior of these chairpersons, he was the first Vice President of the GAA. Sean regularly stood in for the President of the GAA and presented the cup to Kiladangan as All Ireland Intermediate Club champions during this period. Seán was also National chairman of the Post primary committee, a position he held for 5 years. One of Seán’s greatest achievements was presenting the Hogan cup to the Thurles school that his son Diarmuid was involved with in 2009.

In 2007, Seán ran for the president of the GAA, having served in every other position in the organisation up to this. His vast experience and work ethic would have been to the betterment of the organisation but this position was to unfortunately elude Seán.

Reflecting on his career in the GAA for more than 60 years, Seán outlines 2 highlights over the years. In his first year as County Board chairman, he, with others ledthe purchase and initial development of 12 acres that we now know today as Dr.Morris Park.  Seán’s insight into the necessity to purchase and develop this facility was to prove very successful for Tipperary GAA over the years.

Sean’s second highlight was the amalgamation of the 2 clubs in his native parish into the one club we know today as Moyne Templetuohy GAA club. The new club undertook a large development of it’s facilities and today can boast one of the best club facilities in Ireland. Seán’s tireless support and help with this development showed his initiative and foresight for future generations of Moyne Templetuohy Gaels.

On reaching 70 years of age, Sean stepped back but remains committed to all things GAA. He is a strong advocate for bringing new blood into the organisation and feels sometimes, people can over stay their welcome in club positions. He is currently vice President of Moyne Templetuohy GAA club and seldom misses a match. He is also a County Board draw promoter.

Seán Fogarty has served the whole GAA organisation to a level that rarely happens and is now the proud recipient of a Laochra Gael award. A true Gael.

by Jody Sweeney-Chairman of the juvenile club and coach o...

We would like to wish Sean Lyons, Jack Reddan, Cody Doyle...

Our ladies football club was informed this evening that a...

Our Winner takes All tickets are now online. Imagine winn...

A note of sympathy

The senior, ladies, camogie and juvenile clubs would like...

Get live information for Club on the ClubZap App